1tisec1 takes up the royal crown for a day

Last week, we went on a field trip to the Palace of Versailles where Louis XIV( the Sun King) lived. A tour guide led us through rooms of the palace such as the king and queen’s bedrooms, the chapel, the theater, the dining room, the Hall of Mirrors, and the gardens with their beautiful fountains. We strolled around the gardens and took many pictures. Two rooms in particular impressed us. The first one was the theater where the king received his guests and where weddings were held. There was gold everywhere, and some surfaces appeared to be marble but in fact were wood ! It was an impressive optical illusion. The second room which amazed us was the Hall of Mirrors. The room was literally made up of thousands of mirrors because back then, there wasn’t electricity. Thus with the number of mirrors, light could easily bounce around the room creating a marvelous effect of illumination. That room faces the garden to catch the maximum amount of light. We spent a wonderful day discovering Louis XIV’s inheritance, and saw many tourists from all over the world also discovering and appreciating it. 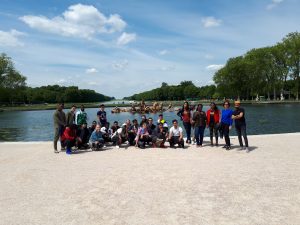